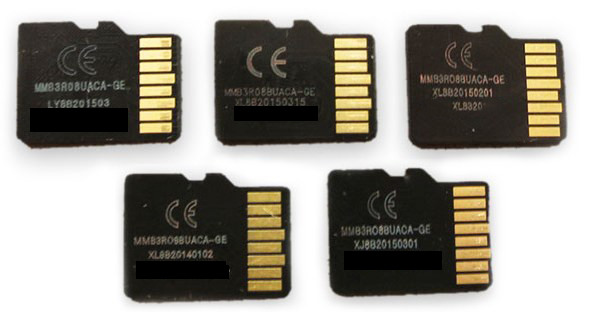 What is fake memory card and expanding card?

The so-called expanding card uses illegal means or programs to make the memory card with a small capacity appear larger on the computer. For example, a 16GB card is displayed as 128GB. Because the capacity is deceived by the computer, of course, the space beyond the original capacity cannot be used normally. As long as the stored file exceeds the actual capacity, the file will be unusable. There are not many expanding card sold by Taiwanese manufacturers, but it is common for Chinese sellers to sell such inexpensive but fake memory card or flash drives. Since the memory technology is still in the hands of Korean and American manufacturers, the cost of obtaining a memory card by a Chinese seller will not be much cheaper than that of a Taiwanese manufacturer. When you see the high-capacity memory card whose price is far lower than the market price, you must be careful to buy the expanding card.

What kind of MicroSD memory card should we choose?

If it is only used for taking pictures, storing files and general home videos, it is recommended not to exceed 64GB. Generally, the JPEG photos of mobile phones or SLRs are only about 2 ~ 7MB, and even when shooting RAW, it is only about 50MB. For music files, 2GB can store about 510 songs.

If it is used for shooting videos, a larger capacity memory card is required. A capacity of 128GB or more is required. The read and write speed specifications depend on the picture quality of the movie to be shot.

In terms of the read and write speeds supported by the memory card, the transmission speed for recording Full HD videos needs to be at least Class 10 or higher, and 4K videos must use a U3 memory card with UHS Speed Class. To record 4K on some Sony phone, you need SDXC, that is, a memory card of more than 64GB to record is better; if you want to record 8K movies, you must use a video speed Class of V60 or V90 memory card!

Dellwa Marketing manager, Alan mentions that with the increasing built-in memory capacity of terminal products and the increasing popularity of cloud storage applications, customers seem to purchase additional external memory cards much less than in the past. Instead, high-priced cards that advertise high read and write speeds have gradually attracted attention. Because the storage content of high-end memory cards is usually the main point.